This is very scientific.  Very real.  Check it out.  I’ll put the link there.

But I’ll tell you what it says:  It says the vaccines are causing 5 times the number of deaths that covid is causing.  In the > 65 age group!  The very group that needs protection most!

And it points out the numbers get even worse as people get younger.

Here’s an extract from the paper of the relevant concluding paragraphs:

Thus, our extremely conservative estimate for risk-benefit ratio is about 5/1. In plain English, people in the 65+ demographic are five times as likely to die from the inoculation as from COVID-19 under the most favorable assumptions! This demographic is the most vulnerable to adverse effects from COVID-19. As the age demographics go below about 35 years old, the chances of death from COVID-19 become very small, and when they go below 18, become negligible.

It should be remembered that the deaths from the inoculations shown in VAERS are short-term only (˜six months for those inoculated initially), and for children, extremely short-term (˜one month) [3]. Intermediate and long-term deaths remain to be identified, and are possible from ADE, autoimmune effects, further clotting and vascular diseases, etc., that take time to develop. Thus, the long-term cost-benefit ratio under the best-case scenario could well be on the order of 10/1, 20/1, or more for all the demographics, increasing with decreasing age, and an order-of-magnitude higher under real-world scenarios! In summary, the value of these COVID-19 inoculations is not obvious from a cost-benefit perspective for the most vulnerable age demographic, and is not obvious from any perspective for the least vulnerable age demographic.

And here’s the paper:

Now what?  Line up for your injections.  Go get a flag and stand by the side of the road and wave as your premiers and prime minister go by?

See how Peter finished his recent article in Quadrant;

“When all of the despotism, police brutality, lies and deceptions are put together, they manifest a failure of our civilisation to stand the test. Freedoms that we thought were protected by representative government, by parliaments, by an independent press; and, importantly, by custom, crumbled under the inept management of a disease of limited lethality. Just one political leader of stature, federal or state, might have made a difference. No one. Just wall-to-wall mediocrities with autocratic tendencies.”

Here’s another head banger from Tom Woods.  Another graph showing there’s no way to tell the difference between States in the USA that impose mask  mandates and those that don’t.

But no one is listening. Are they? 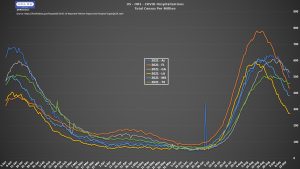 and here’s Tom’s Post about it all.  With the graph again. I just put it there to try catch  your eye.

This had to be a gag, right?  China never thought it’d go like this.  But once it got running they went with it. And that’s what’s happened everywhere.  It is a bandwagon now and billionaires, drug companies, coppers, politicians, all sorts of people are loving it…..  but it’s a madness.  Here’s the pic and the article I found it in. On Alex Berenson’s Substack page.  Alex is there because he got deplatformed.  By those people who think they are building a better world by practicing censorship.

go figure, as the americans say.

Here, it’s a good read I think, just about tells it like it is:

I think of this ‘expose’ mob as deliberate dramatists, stirrers, sensation seekers, etc…  So I’m pretty suspicious of them.

But every time I get into the numbers they display (which, it must be admitted, are not their numbers but official stats they’re merely showing us) and figure them out it turns out they’re right in what they’re claiming.

And the essence of what they’re showing/claiming here is that the vaccines are upping the death rate.

Figure it out for yourself.

The Vaccinated account for 77% of Covid-19 deaths this summer. This is a FACT. It’s time the Mainstream Media stopped LYING to the Public

Nitty gritty science.  been sadly lacking since they threw it away back at the time of Ioannidis’ explanation of what was happening followed by Sunetra Gupta, et al..

Our insaniters  (‘portmanteau’ word meaning ‘insane leaders’) would have you believe science doesn’t exist and if it did it wouldn’t by any of our concern – which concern is simply to do as we’re told in the hopes of some future breadcrumbs of ‘freedom’ for good behaviour.

In their madness, like little children, they think what they don’t look at isn’t there.

It seems completely without reason.

They’ve now thrown all pretence away and are forcing the whole population, young and old, to be vaccinated with the certain prospect of even more vaccinations later.

Democracy and freedom be damned.  They openly state that they’ll ‘restore’ freedoms when you obey to whatever level they decide.

That is: they openly declare you have no freedoms any more. You only have what they choose to give.

Which, of course, is further declaration that democracy and the democratic process has been thrown away.

Now why this utter madness?

Ostensibly for a virus that simply isn’t that bad anyway.  Simply is not ’emergency’ status.

In favour of vaccines that demonstrably are failing everywhere and are predicted to fail – in the face of predicted variants?

In a scenario where the scientists tell us the vaccine regimen itself leads to the variants that defeat the vaccines?

In a world where early treatments and alternative medications are hidden, avoided, banned from mention and even prohibited?

That’s all utterly insane. Utterly. What possible rationale could motivate it?

I can see only one:  they want everyone vaccinated and then it will be impossible, they think, to find a ‘control group’ to show what would have happened if there had not been the interventions and the suppression of treatments and the forcible vaccinations.

And they can then escape culpability.

Until you realise it only applies within the borders of one nation, or one small group of nations, it can’t possibly apply to the whole world.

Out there in the world the truth will manifest.  As it is doing now, in fact.

So what is it?  These lunatics believe we really are lab rats caught in their laboratory and completely disconnected from the outside world?

If it’s not, then please, tell me what it is.

A very well credentialed man now put down by the establishment as a nutty conspiracy theorist he deserves to be taken seriously and have his claims at least looked at and checked.